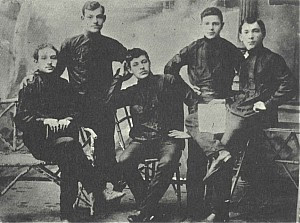 The wide avenues of Baghdad.
An attic room, sealed from the outside.
A pronoun cluster, incinerated by dogs.
A bitter sky, on a sober landscape.
Regrets are stupid, and exile is a matter of degree.
A matter of harmony, or hierarchy, like everything else, and as arbitrary.
Like a flight of scarlet pigeons, or a few wild nights where your thick skull stopped you from getting, you know, really out there.
A graceless trepanation in the soft earth, the collapse and realization of all literatures.
But what is the accumulation of all human knowledge compared to our corporate stupors.
In a volcanic landscape we were fed to mercenaries.
In a house in the country we heard the tricks of digestion.
In an alley in Paris we learned all of human history.
Constantly speaking of our mythical entry to the world’s cities, on a diet of medieval bread, we became businessmen, conductors, the entire universe.
But thats only true from the perspective of one or two outdated formulae.
In terms of a different set of harmonics this could be anywhere, Haymarket or Kabul.
And we could be pigs.
But I’m not going to let any of that stop me from enjoying my retirement.
It ends in petrol, rags and ice.

I think this is good.
steve