Peter Weiss: The Aesthetics of Resistance 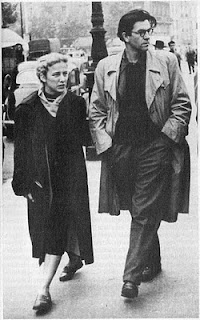 Crude beginnings could be erected from the shattered monuments, some wastelands were initially penetrated only by letters of the alphabet, with which people arduously learned how to read.

The more unreservedly we received the testimonies from the most diverse directions of entanglement and seething, of destruction and authoritarian uprisings, the more nuanced became our image of the world and our appreciation of the richness of language.

While reading, while examining images, I no longer entered a secluded special area accessible only to initiates, instead everything that was shown was integrated into my personal experiences.

Our consciousness guided us to books and pictures, it triggered conversations for which we had become ready only at this moment.

Later, after we achieved political understanding, our hatred grew more intense, we began purposefully fighting those who tried to hold us down, annihilate us. We were guided by a cold, homicidal repulsion. Very seldom did we find this sensation articulated in art, in literature

It was as if there were no language as yet for this grubbing and rooting, for the hours of lying with bated breath, the slow groping forward, the searching for nameless middlemen, for encoded addresses, for the sudden confrontation with the murderer.

I saw that this was quite wrong, that the definite and the concrete were surrounded by a thronging, by a lurking and choking, and, immediately underneath it, all that was to be found of names and terms was a babbling.

How could what we were experiencing, I asked myself, be delineated in such a way that we could recognise ourselves in it. The form would be monstrous, would cause dizziness.

All of the above taken from the first volume of Weiss' novel The Aesthetics of Resistance. Very highly recommended.
Posted by Sean Bonney at 5:51 AM