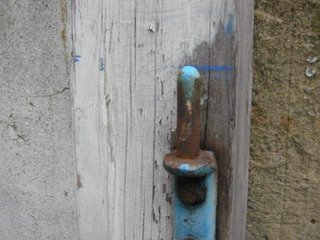 (((17))) --- I am hard of & can’t hear my own voice. we hope to reach beyond our condition or puke on the hope society. that was a fragment of dialogue. you are scum. I think I should kiss you. Baudelaire is not important. modern poetry is crisis exhaust. it is very strange: call it thought, however, falls / or London does collectivedly on its clean capitalist face EXAMPLE split 'it'::::make it distant & weirdly dense balls of combustible letters, meaning am trapped in Hackney /// am one of its ghosts, mouth soldered.
Posted by Sean Bonney at 3:42 AM

I like these ones. They're not what you said. Actually when I was reading that Cities of Red Night thing I was also listening to tinny _Bartok the Magnificent_ coming out of the ears of the woman opposite me, maybe that's why it was strange.

The affected dispossession of conceptual thinking designated as aporia is affected (not real), because conceptual thinking is not dispossessed in its various intractable crises but, on the contrary, is possessed -more securely than ever-, by virtue of its abrupt deference to whatever undefined capacity of intellection continues in its place, in stewardship of the discourse of its crisis. This is the comedy of deference in professional thinking, the endless one-stop seesawing of a theoretical discourse into the charade of dispossession prepared for it in advance. Aesthetics “as we know it” cannot address the enormity of its own abuse and expropriation at the hands of its and our enemy, or in light of an historical event too disproportionately tragic to be countenanced, without a compensating spectacle
of theoretical crisis and “fundamental” disorientation of its own concepts. This spectacle is the imprimatur of our freedom from ideology. It is also the quite natural consequence in theory of our continuous, inert, effectless deference to the imperialism of the United States in social reality. We call that deference radical thinking.

One of the more talked-about actions involving the Clique was the MSG Incident, which took place on May 19, 1996 and involved all of the Clique except for Waltman. At the time of the incident, Hall and Nash were about to leave the WWF for WCW. At a major WWF house show in Madison Square Garden, Michaels and Levesque (as Helmsley) worked separate singles matches with Hall and Nash. Earlier in the card [lineup], Levesque worked a match, as a heel, with Scott Hall (as Razor Ramon) in which the departing Hall would job to Levesque to put him over. Later, in the main event, Michaels, as a face ["good" wrestler], worked a steel cage match with Nash (as Diesel), as a heel ["evil" wrestler], in which the departing Nash would job to Michaels to put him over. Immediately after the match, Hall walked towards the ring, came in, and hugged Michaels. This was not seen as a problem, since both Hall and Michaels were faces in the storylines. But after Hall and Michaels hugged, Levesque walked towards the ring, got in, and also hugged Hall, despite working a match earlier in which Hall was a face and Levesque was a heel. Then, Nash stood up after being pinned by Michaels and all four shared a prolonged group hug.

Their actions in the "Curtain Call" scandalized WWF management, who at the time wanted to maintain the illusion that the supposed antipathy between faces and heels was real and that they were not friends outside the ring.

your poetry is very beautiful