after Rimbaud: A Foodstamp for the Palace

For sale. Everything the management dictated. Celestial dirt and the western scale.

For sale. The odour of sanctity. Fictional factories. Special discounts on bossnappings, modern landlords  and the seekers of lice.

For sale. Top people of all descriptions. Chewing lice, sucking lice, bird-lice. The victory of the rioters at Poundland. Ed Miliband fucked by lice. Cameron as nightingale, wrapped in wire and torched.

For sale. The defect in the law and the dream deferred. All financial metaphors inverted. You will only starve when we tell you. An infrageography of microtomes and tactical spectrums.

For sale. The gospel of saving and abstinence. The victory of the Mau Mau at St James’ Palace.

Everything must go. The unspoken fantasies of electrical wire. 3000 subspecies of electrical lice. Sudden harmony and affliction. The corrosive victory of the unemployed. A car-bomb for the DWP. Exit wounds for specified customers only.
Posted by Sean Bonney at 7:22 AM No comments:

Letter on Employment or Not 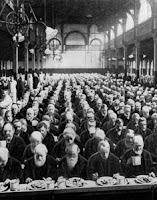 I disappeared recently, don’t know what else I could have done. I know anxiety is the general condition, but that doesn’t mean it can’t open sinkholes in every aspect of your entire cellular system until, well, the simple velocity of starving to death becomes pretty much synonymous with the simplistic velocity of the society itself. Your social functions become that simplicity. To sit very still, to never leave the flat, to be surrounded by raging melt spectres. You probably think I’m exaggerating. So fuck you. OK, I’m sorry. I’ll try and explain what I mean: the latent content of that simple phrase, “fuck you”. The High Street. Walthamstow, or anywhere else. Everyone gazing at their reflections in all of the empty shop windows, weird technicians digging up the pavements. I think its great, I’m not kidding. Its as if the reflections we’re so hypnotised by are some kind of safety valve, as if the city is a spiralling Medusa and the only possible escape is, well, you know the story, and if you don’t, I’m not gonna tell it. I mean, its hardly an appropriate time for a revival of mythology etc, unless you understand that mythology to be the accumulated historical functions of glowing molecules and radio gas, an intracranial solid neoplasm that, if decoded, will at least give us some sense of the next stage we have to reach in what some people rather quaintly call “the struggle”. Yeh, I know, I’m one of those people. Anyway, those reflections we’re all gazing at are basically the visible points of an inverted world nailed onto this one, hacked onto it, setting up an insect system wherein each hour of socially necessary labour time becomes detached, and habitable, in the way an abandoned office space or a semi-derelict private home is habitable. Yeh? Meaning we are locked out. But actually, to be “locked out” can, in some sense, be read as an advantage. Misread, for sure, but maybe a productive misreading for all that. To get a sense of what the murderously rotational teeth of a key, for example, actually mean. To understand what eating actually is. To know what biting is, and consumption, and swallowing, and digestion. To understand the secret cellular fuck-toys of the entire social labyrinth as a simple sheet of buckling and jagged glass. And all of that is pretty much what I mean when I use the phrase “fuck you”. Anyway, like the ghost I’ve become, I’m now looking for a job. Actually, I was hoping you’d write me a reference, I could do with a laugh. You’ll do it, of course. I know it.
Posted by Sean Bonney at 10:18 AM No comments: