Our Death 30 / On Ways to Say Goodbye 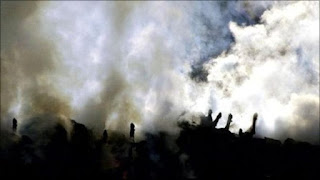 On the fourth day of my sickness I lay in bed increasingly concerned by the status of a memory I couldn’t shake: a village at twilight, uninhabited houses, several animals burning. I was sure I had never been to this village. The texture of the sky, the nameless blue of the mist, everything suggested an apocalypse that it was impossible for me to have lived through. It reminded me slightly of the early scenes in The Time of the Wolf. You know. The sections after the father has been shot dead, but before they reach the wasteland. Great gusts of silhouette. No shelter or food to be found. The splintered meanness of the countryside. It put me in mind of the mass incineration of farm animals during the foot and mouth outbreak that took place in Britain in 2001. You remember that? When they burnt all the animals. I remember seeing the images on TV, and saying to everyone who’d listen that Britain was in serious danger of putting a hex on itself, behaving like that. The ghost mathematics involved in that: smug lifestyle journalism plus retro guitar chords plus the 1990s compressed until they are transformed in their sleep into incinerated, invisible villages. That type of thing. Obviously I was right. But it wasn’t that was bothering me. It was simply the light, the unnameable blue at the centre of this nameless memory, a still-point that should but couldn’t be passed through. That’s what the end of the world looks like, in The Time of the Wolf, which sometimes I think is my favourite piece of apocalypse cinema simply because you learn precisely nothing, except for the simple fact that you can’t tell whether or not the end of the world has just happened or is merely about to happen. Like a sleepless night, an endless regret, or a hex that you dropped in a parallel life. You feel far from yourself, like that part of the land which is also part of the sea. A sadness so great that you have to invent new words to express it, and when you say those words either you or everything else vanishes, and you’ll never be able to quite tell which. Except that you will go out into the streets and it will be very quiet, and there will be new constellations in the sky, and you’ll know they’re new because they will already have names. The Kids Who Jumped Into the Fire. The Strangled Bird. The Blood of Horses. The Incineration of the Pigs. The Deserted House Burning. The Defence Speech of Emile Henri. Etc. A huge meteor will be approaching. It will contain all of your unlived memories. All your unspoken names. The other half of a helplessly oppositional sky.

Our Death 29 / The Ghost Dimension 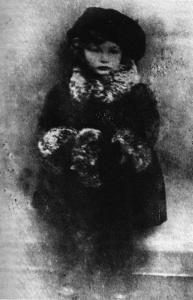 We don’t know their names or their faces. They are gathered in ruined houses, in water-damaged pictures. They are not our gods, our hypocrisy, your chastity. Who are you anyway. The cities consumed by the winds. Theirs is not your glitter. It is not their stars that encircle your cities where cold and evil bastards are building something hungry. Their names are very different. We use them, those names. New uses for gravity. Methodologies of the wrong apocalypse.
Posted by Sean Bonney at 4:30 AM No comments:


Early evening at my desk in Kreuzberg. Quiet mood, grief and rage.
Posted by Sean Bonney at 11:37 AM No comments:

Our Death 28 / Dancer (after Emmy Hemmings) 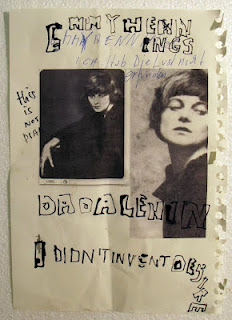 I guess they’ve probably got me on their death-list somewhere. Probably quite far down. Not that I’m bothered - I’ve always been fairly careful inside my life, am quiet and am often frightened.

One day they smashed my heart. Since then I’ve been getting sicker. So what. The Angel of Death - if that’s what they call it - is on my side. I’m going to keep on dancing till they get me. They can nail me into whatever filthy little grave, I’ll never snitch on anyone.

All these banners and people and songs. Its like I’m flying through caverns, through grottoes and mythical tunes. I have bit-parts in other people’s dreams. I interpret their faces. The old, the sick, the beautiful, etc, none of them mesmerise me. A black cross in the centre of my room.
Posted by Sean Bonney at 1:59 AM No comments:

Our Death 27 / Under Duress 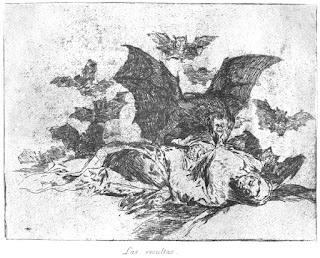 Whatever with that fascist shit Bannon. He can have Darth Vader. He can have that whatever-its-called from Lord of the Rings. But he can keep his paws off Satan. Satan is one of ours. Always has been. But having said that, it is very boring to write a poem about Satan. Baudelaire did it, and it was great. Milton too. And Blake. It is very boring to write a poem about Bannon. Like, for example, I’m speeding like fuck right now, and earlier on I was in a bar, and I was hanging out with friends and they are all complicated and wonderful and I love them, and all of our worlds are falling apart, and I would like to talk about that, about what we were asking, about phone reception in the land of the dead, and etc and other things. But instead I feel that I should be talking about Bannon. Imagine doing drugs with him. I can keep going for five days at a stretch. Monsters appear and ghosts and that, and they are uglier than Bannon. Except they are not, because their conversation is interesting. Like there we'd be, chatting away for days and Bannon like he would just be dead on the floor. No-one would notice. You know, he’d just be dead. We’d have to dump his body somewhere. Like in one of the new developments or something. How annoying. How tedious this all is. I guess this has something to do with the sun, that solar bastard. I guess this poem is lame and I feel kind of lonely and blah but. Remember this. Our word for Satan is not their word for Satan. Our word for Evil is not their word for Evil. Our word for Death is not their word for Death. I hate the word ‘kill’. Will continue to use it.
Posted by Sean Bonney at 5:27 AM No comments: