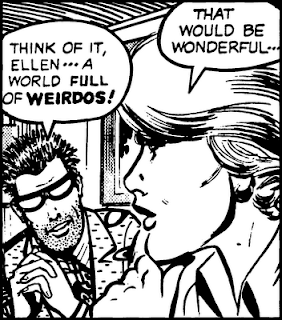 yeh yeh. everyone's seen this cartoon before, but that doesn't stop it being great. it was even used by a gang of squaresville poets advertising a gig at the poetry caff a few years back, but they substituted 'poets' for 'weirdos'. totally superfluous - all real poets are weirdos. everyone knows that.

by the way, everyone should get a copy of estaphin's brilliant DCLP, from Veer Books . if anything could be called 'conceptual poetry' its this / but instead of being a simple poeticisation of our alienation, or a macho display of pseudo-newness / its a superb collage of language, nastily joyous & righteously exasperated, about cottaging and surveillance, using mainly found material & stuff from chatrooms etc. there's a good bit when the authorities at Canary Wharf (London's premier symbol of the occult power of capital) find out whats going on in their toilets: "men are using public toilets at the heart of the estate for homosexual sex . . . right under the noses of some of the world's most powerful companies", goes the headline. yeh, thats what 'powerful companies' are for.
Posted by Sean Bonney at 1:23 AM