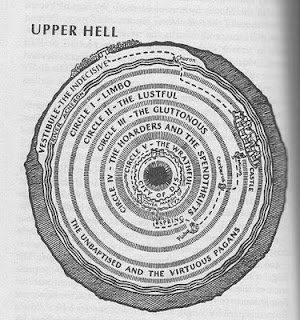 The problem I have is how to make it talk back, how to make whatever it is that is trapped in aesthetics, idealism and in history learn to speak.
Posted by Sean Bonney at 1:56 AM

Milton's "darkness visible" offers one possibilty (I guess it's also implicit in Adorno); that living as critically rather than knowingly (the world of 'creatives', advertising, etc.) as possible within negativity is to identify a route out of negativity: or, in a world of dead images & images of death dressed up as images of real life (cinema of blasting THEM away, etc.), blindness is a way to see & to create images of life (it's a very old poetic idea, as well. But that doesn't mean it isn't applicable differently, or less 'Ideally', now).

The terrorist as damaged manifestation of utopianism. Milton's Satan, perhaps? How to find any other manifestation: the bourgeois state relies on terror, which it calls anti-terror, & relies on terror to deploy anti-terror against. But how, effectively, do you oppose the state? Perhaps it is a matter of collating a set of actions, discourses, works, that run counter to those of the state & that do everything in their power other than the terror the state wants them to commit to refuse - not resist, refuse - recuperation.

I've been thinking about this, recently, through the figure of Gudrun Ensslin. Sorry, this is a ramble. It feels like no way out. But the way out is perhaps through doing the wrong things - writing the wrong way, not adopting the words of proper discourse - to always act in ways that the bourgeois state least wants you to (including, not be the kind of terrorist the state needs you to be) & to build cells of resistance as widely & diversely as possible (which isn't an argument for soft forms of political/activist pluralism).