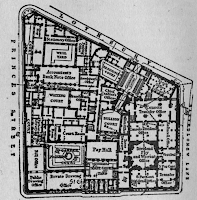 it is not the cops > but geometry, from
this perspective is eerily silent about
its more scandalous projections < we
have scraped its clocks clean, we have
inserted a brown cigar, a cheap and easy
proto-tone, we have called it a village.
> oh hell. we are your population, turning
at 360 degrees, where King Charles I is
equal to or lesser than Ian Tomlinson, or
we already said that, forget it > we press
hands together, as scars of circling bone
where silence is also prohibited, funded
guns surround the city banks’ networks
of compulsory metaphors speaking aloud
Posted by Sean Bonney at 2:22 AM

This is great: I've felt tones of Huggy Bear and Dizze Rascal in these poems