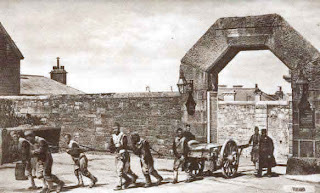 to be continued
Posted by Sean Bonney at 4:33 AM

This is brilliant and useful.

But I still worry whether this sort of thinking is simply nihilism.

I gave up on academic Marxism because when my academic career was destroyed all the academic Marxists looked the other way. No comment. So Benjamin-type 'destructive nihilism' began to look like no more than the mirror-image of the capitalist destructivity which destroys lives and looks the other way. Academic Marxists, in their coldness and brutality, simply replicate and prop up the wider societal brutality: this is contemporary nihilism. No values, no hope, if you become a victim of the system you can just crawl away and die.

This is why I worry whether there is anything more than nihilism being proposed here. You say:
'The “passion for revolution” into which Nechaev must eradicate his being is only the negative expression of the “passion” for money to which any bourgeois will ecstatically sacrifice their person. Jackson is forced into a more radical position than either Rimbaud or Nechaev precisely because of the forced eradication of that passion.'

But if Nechaev chooses to eradicate his being (rather as I chose to no longer communicate with any of my former so-called colleagues, when my career was destroyed), and Jackson's revolutionary passion is eradicated by capitalist society, what is the difference between the two? Ultimately, both are/have been reduced to nihilism.

Having said all this, I do sense real potential for hope here - if only because you have the courage to confront the issue of contemporary nihilist drift - which defines today's beaten-down, hopeless academia/intellectual non-life - head-on. I think this is a brilliant and necessary post.

Hey Robert - really good to hear from you, & thanks for the amazing comment. Gotta admit, I'm feeling fairly nihilistic - but my answers to what you say will be there in part 3 of the essay, which'll be up in the next week or so.

In the meantime send me an email. It'd be good to catch up.