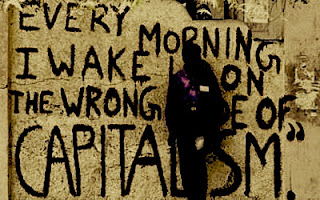 As for the political thought of the Black Panthers, I am convinced it originates in the poetic thought of Black Americans . . . . We are realising more and more that a poetic emotion lies at the origin of revolutionary thought - Genet

This antagonist is still maintaining his incognito, and he resides like a needy pretender in the cellars of official society, in those catacombs where, amidst death and decomposition, the new life germinates and blossoms. - Heine

The songs I heard there seemed to have been composed in hell and the refrains rang with furious anger. The demonic tones making up those songs can hardly be heard in our delicate spheres, until heard with one’s own ears in the huge metal workshops where half-naked figures illumined by angry sparks from the forge sing them with a sulky, defiant air, beating the time with their iron hammers: the boom of the anvil makes for a most effective accompaniment to the scene of passion and flames - Heine

Accordingly, the dialectic image should not be transferred into consciousness as a dream, but in its dialectical construction the dream should be externalised and the immanence of consciousness itself be understood as a constellation of reality - the astronomical phase, as it were, in which Hell wanders through mankind. It seems to me that only a map of such a journey through the stars could offer a clear view of history as prehistory - Adorno

The revolutionary kernel of the poetry fetish becomes clear if George Jackson’s letters are read simultaneously with Lautréamont. In a 1943 essay on Lautréamont , Aimé Césaire wrote that “by means of the image we reach the infinite”. This “infinite” is no bourgeois escape route through which the poetry fan can reach a gated community of cosmic harmony: when Lautréamont  sneers that his pen has made a boring Paris street like Rue Vivienne “mysterious” he means the poetic image has been transformed into a splinter of glass fixed into the centre of your eye, a glass through which we see the capitalist class as the lice and bedbugs they really are, and in like fashion, the proletariat become a swarm of red carnivorous ants. In a figurative storming of the Bastille - or Newgate, or San Quentin, or Soledad - the counterpanoptic of the poetic image gives an x-ray view into the infraviolence of capitalist reality. Césaire’s Discourse on Colonialism, published in 1955, insists that Lautréamont’s work is an “implacable denunciation of a very particular society”. The “infinite” is precisely that “denunciation” where, in Adorno’s terms, hell wanders through humankind. The world turned upside down, or inside out. Blake, who right now I’m tempted to call the English Lautréamont, tracked a similar activation of perception:

Now will I pour my fury on them, & I will reverse
The precious benediction; for their colours of loveliness
I will give blackness; for jewels, hoary frost; for ornament, deformity;
For crowns, wreathed serpents; for sweet odors, stinking corruptibility;
For voices of delight, hoarse croakings inarticulate thro’ frost;
For labour’d fatherly care & sweet instruction, I will give
Chains of dark ignorance & cords of twisted self-conceit

The “precious benediction”, “crowns” and “sweet odours” which are all of our birthright have been blasted apart by capitalist alchemy, and our “voices of delight” have been occupied by advertising, which can only be countered by the “hoarse croakings” of the poetic hex. But the realities of the prison cell and the police bullet have made poetic beauty banal. Capitalist poetics transform everyday life into the advertiser’s sublime. Every abandoned billboard is a bulletin about the nature of your invisibility .The collapse of capital has neutralised poetry’s counterpanoptic: Blake becomes an emblem of English nationalism, Lautréamont  becomes a refuge for goths. And yet a nonconformist reading might force an electrostatic discharge, a brief flash where whatever remains unstable within the poem - everything that cannot be reduced to simple fetishism - is all that is available. What interested Benjamin about the early 20th Century avant-gardes was their intermingling of “slogans, magic formulas and concepts”. The sharp clarity of the slogan pierces the esotericism of the magic formula, forming new constellations of meaning and a new rationalism absolutely alien to bourgeois forms of logic. If its true that only poetry can do this, its also true that hardly any poetry (be it the so-called mainstream or the so-called avant-garde) actually does do it. When, in the poem “Black People”, Amiri Baraka said “The magic words are: Up against the wall mother / fucker this is a stick up” he had found the almost invisible point where George Jackson and Lautréamont  become the same person, where the revolutionary tract and the esoteric poem become the same thing. The “wall” is the limit of the poem, and also the contested site where the poem blends into absolute reality, where the “invisible point”, in its moment of crisis, becomes visible, and yet . . . . .

Where's that Blake quote from?
And the second Heine one?
Thanks

Hi Robert ///// the Blake is from The Four Zoas, Night the Sixth (Lines 35 - 41). The Heine is cited in a rather iffy book called "The Doctors of Revolution", by Shlomo Barer - a rather gossipy collective bio of Heine, Marx, Bakunin etc.

Thanks for this information. On Amazon that Barer looks at first glance like a sort of (historical run-up to) Michael Loewy's 'Redemption and Utopia'. Looks interesting.