Letter Against the Firmament / A Treatise on Mathematics 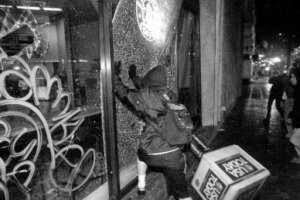 a rewrite of this piece here - obviously, its complaint that "nothing is happening" is no longer accurate, but it may still work as a celebration of the impending royal birth . . .

I haven’t written for a while, I know. There’s not been much to write about, or maybe, if there has been I haven’t seen it. That’s leaving aside, of course, the royal birth, the jubilee pageants and the olympics, that inbred panegyric. Christ, I’ve really felt the wings of imbecility passing over me lately, over all of us. Its as if the ruling class, sheer power, whatever you want to call it, whatever it’s local franchise likes to call itself, had, via some kind of sadistic alchemy, taken the moment (around 2 in the afternoon) on 27th March 2011 when the Black Bloc had gone running up Oxford Street, and had basically erased that moment, replaced it with a long and uninteresting parade of babies, flags, cupcakes, brooms, victims, mummifications, the UKBA on every street corner, their guns, their illegal warrants, their racial profiles and problem families, and their scabs. I thought this morning that I might be able to pull it together for you, this immense shift in the immediate social atmosphere, this peculiar tectonic whitewash - I thought I might be able to pull it together as some kind of wondrous mathematics, a monumental calculus, but I can’t get it to fit. Because, for example, if you take the forced removal of the homeless from all commercial zones within the city, multiply that by the statistical weight of the key dates of any given revolutionary narrative, each of which is then to be inserted, almost like an experimental flu virus, into the generalised chronology of whatever century this is supposed to be, if you take that and divide it by the approximate half-life of all occupied buildings and street-fires recorded over the last, I don’t know, half  century, and from that extrapolate the given name of every person suicided since the new welfare regulations were introduced, extrapolate those names and place them inside a small box built of absolute plutonium, i.e. the sheer terror all of us have started to feel at every unexpected knock at the door, if you do all of this you may be able to get at least some kind of sense of what has actually been done to all of us over the past couple of years, because after a while, say for example a month, those names will have been, via some kind of corporate alchemy, transformed into the manufacture, sale and distribution of third degree burns, multiple organ failure and tiny droplets of phosphoric acid, mostly for overseas distribution, obviously, but the same ingredients can also be boiled down for the home market, boiled down and transformed into an infinitely dense, attractively coloured pill which, upon ingestion, makes the whole city seem like a golden swarm of dragonflies and pretty moths, in which the latest royal baby can somehow pretend not to be an injection of homeopathic rabies into the speaking abilities of each and every one of us, and in which the street value of each of these pills can be taken to equal the external force of the ancient city walls considered as a rudimentary and absolutely incomprehensible incendiary device, and those walls are made of silver, which is cut with sulphur and arsenic, and those walls are of gold, which is made from sand and dust, and those walls are of mercury, which is unsuitable for making coins, and those coins are of piss and phosphor, each in compliance with international law. It would, of course, be a very partial calculation. So much for maths as an algebraic counterforce to capital’s tedious little multiplication tables, it keeps coming out more like an oracular scattering of starling bones, of meat and shrieking larks. The place and the formula, as Rimbaud called it. 16th July 2013, for example. Or June 6th 1780. Or 6th October 1985. All the constellations of the royal bastard. London, the city of Mark Duggan. We, the servants of dogs. And you ask me why I don’t write poetry. As if a metaphor could actually be a working hypothesis, and not just a cluster of more-or-less decorative alibis. I can’t do it. I haven’t slept since Thatcher. Curses on the midnight hag.
Posted by Sean Bonney at 8:20 AM