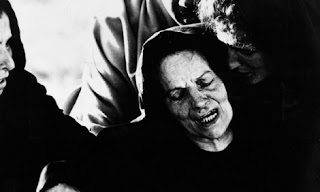 Pasolini’s utopia is the necropole, what Hölderlin called the nefas. It is a counter-sickness, a naked factory-owner screaming in the desert, a force from the past tearing up the present because it comes from the future. History is invisible, is exclusion and contagion.

A ring of slums encircles the city, as inexpressible distance, measurable only in light years. Memory etched in the boarded up windows, the promises that business will be resumed presently. ASAP becomes ACAB. Bitterness perfected.

Is loneliness is. Not family photos. Not memorials not. Distance is. Loneliness is. Queuing for food and. Crackling of bone and. Hanging of meat and. Calais is. The border is. Loneliness is. Yellow fire is. Glassing the present is. Not you not. Blood clots not. Bruises not. Prisons not. Hatred is. Hatred is. Without a passport is. Not melancholic is. Bought and sold and. Yes wakes up early and. Yes cleans your office is. Not your self-pity is. Nine to a room is. Not your cocaine is. Drowns in transit is. Counting of wounds is. Dances on tables is. Is loneliness is. Planets of glass is. Whirling is whirling is. Knives of glass is. Over your head is. Swirling is swirling is swirling

But the possible which steps into reality, as reality dissolves, this has a real effect, and it effects both the sensation of the dissolution and the memory of that which is dissolved. - Hölderlin

Open the door and give me money.
I haven’t moved. You can still find me
But years have passed and my nails are jagged and filthy
And I frighten my friends and my mind has
Vanished. I left it here. I can’t find it.
And when I hear my name I become afraid
They want me to betray you. They want me to lie.
And I’m frightened of the voices because the voices lie
They say they shot you in the legs
I know they never aim at legs
They shoot you in the mind.
Keep it together. Keep moving. 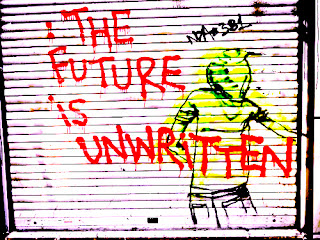 If, for Pasolini, fascism is the dream of death that, in emergency, becomes capital’s raw force and keeps it alive, then communism is that which scrapes and wheezes at its edges, is the death encoded in traces of historical memory. But this is a commonplace. Metaphor as fixed lie. Metaphor as catastrophe. Pasolini’s era is further from us than Hölderlin’s ever was. The shift in epochs is the nefas. We pass over without noticing. This is the meaning of the illness of St. Paul. The struggle is not, as both Walter Benjamin and Frank Wilderson have claimed, between the living and the dead, but between the dead and the dead. Dead history and dead future: a showdown between the desert and surveillance camera. In Mathew, the devotional is suffocating, is crazed with starvation, fear and atrocity. The disciples have flies crawling on their faces in every scene. Malediction is realism.

Someone has taken our knives. We go down like the sun. Place of birth. Unknown. They have scratched away our slogans. Colour of eyes. Unknown. We go down like hail and rain. Year of birth. Fuck it. Next time they shoot us, we’ll refuse to die. Its raining again. Give me a cigarette. 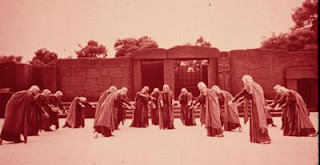 Some academic once wrote of Pasolini that we should “turn down the volume on his political sermons and listen to what he whispered in his work”, which is obviously pretty stupid, as the politics are precisely within those whispers. In the St Paul screenplay he quotes Corinthians, on “hearing inexpressible things, things we are not able to tell”. And in his final essay he makes it clear what those “inexpressible things” are; they are names. The names of those responsible for massacres, the names of the owners of power as it exists behind known power. Names that it is impossible to recite and still live. This has very little to do with what is still called ‘magic’.

We are being followed. They are hunting us, are mostly silent. Lines of them, they are hunting us. Their sentences, relatively simple. Our hunters, our educators. It is very simple. We don’t mention the silence. What we keep inside our whispers. In our signals, in our silence. As each of their faces change. As each of their cells divide. In great procession, the faces. Their lessons are endless. Silence, in circles, our hunters. As if we were dogs. As if we barked at strangers. And now they will murder. There is safety in murder. Somewhere are angels. Angels have claws. Dogs are everywhere.

Here come the evictors
They’ve got us by the hair and throat
And bound us with it, bound us
To the floor and the bed, all of us
This is the way they put up the rent
The rent changes, the names change
Our names change, the street’s names
40 degrees in the shade
Next time they shoot us, fire back 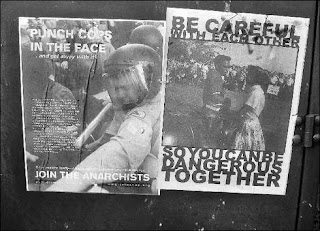 Meanwhile, the Chorus, weirdly absent in Pasolini’s interpretations of Greek myth, but who for Hölderlin could speak “almost in the manner of the furies”, are, put simply, the un-named. Those who eat dogs on the surface of the planet of slums, and scream out their names from the centre of the desert. And “chorus”, when spoken from within certain archaic accents, is almost the same word as “curse”.

Thanks for reminding me, Sean