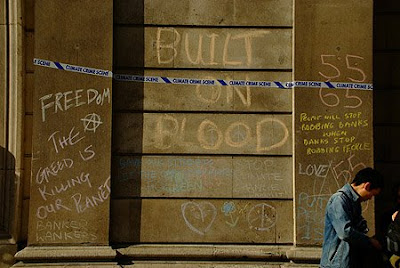 The City of London protests last week, however ineffective they may have seemed to the official media, were absolutely successful in that they tore a hole, albeit briefly, in the process of ‘business as usual’ and normal, alienated everyday life, something a lawful demonstration could never do. It is not the case, as at least one well known poetry blogger has claimed, that a small group of ‘mad and violent’ protesters were there to spoil the ‘fun’ of nice, reasonable protesters. Far from it: anyone who was there knows the real violence was dealt by the metropolitan police. The anarchists smashed a few windows. The police deliberately provoked the crowd, at one point were seen literally booting peaceful protesters in the face, and may well have been responsible for someone's death.

The peaceful and the violent protesters were two necessary halves of a whole that made manifest the latent violence of corporate society. The apocalyptic, that is revelatory, theme of the protests turned out to be superbly appropriate. All of us who were there were faced with the bottom line of our ‘fun-loving’ and ‘sophisticated’ culture where police violence is clearly the borderline between the everyday comfort of a high proportion of the population and the casual murderous brutality dealt out as a matter of course by our ‘elected’ ‘leaders’. The violence of the anarchists, even the violence of the cops, is insignificant compared to the bloodbaths of the Middle East, the increasing institutional xenophobia throughout western Europe, or indeed Barack Obama’s intention to continue the War on Terror. Most intelligent people know this, but most of them like to pretend that nothing can be done, or that they are somehow innocent. The protesters, both violent and otherwise, are at least trying to work out how capital’s bloodlust, and all of our parts in it, can be brought to a definitive end.
Posted by Sean Bonney at 5:58 AM

Hey Sean, hmmmm, well, I just find a couple of things here problematic, especially in response to The 'real' violence being dealt out by the police etc I mean surely someone who is a police officer is subject to the same violent coercion as we all are, we are all living under the umbrella of Capitalism it is inside us all, we hurt each other in the protests, whilst others watched the news, and the windows smashed of the buildings, who built them, Labourers, tradesman, and who will fix them? Labourers, tradesman, I mean my point is I think that they're are no bad guys, we are it, each and every one of us, I mean you wanna smash something, smash your self because capital is inside you, inside us all, in language, fear, no one has this system in the grip of their claw, it is now self manifesting and self eminating, or so I think

I mean of course their are important structural changes to be made economically, of course, but my point is that this system is passed down, mother to son, father to daughter in behaviour, perspective, especially language, as a carrier of ideas, a structure of thinking,

what do you think?

hey, sorry, while I'm thinking, so, we created a hole, a hiatus in business as usual from the alienated everyday life, great, so what did we do when we had that space, the space allowed by that violent disruption, which was actually no space at all, we kicked the shit out of each other, great, of course I know its more complicated, but...

Jonny Liron said...
This comment has been removed by the author.
5:58 PM

hey man, one more thing, I also think its quite, well Capitalistic, if you will, to talk about the protests by referring to 'The Police' and 'The Anarchists' everyone there had and has a name, a family, information, you know,

Yeh Jonny / somebody made the windows, and they were probably ripped off for it (you know, surplus value etc) . . . .by which I mean, uh, we are all inside capital (not under the 'umbrella' of it), but that doesn't mean you can't recognise it for what it is, which is a system of organised violence, the victims of which are usually hidden from us. yes, it is a 'carrier of thinking', as you put it, but that doesn't mean we can't try and change that thinking. from inside.

As for there being no bad guys - did you see what the cops were up to? Did you try and talk to them? Or do you think police brutality is just fine, cos whoever is dishing it out didn't make the decision to do it for themselves (btw, I don't see why its capitalist to call people 'anarchists' or 'cops', I didn't go round asking their names)

But finally, you're right, we didn't do anything with that hole we tore. No beings from another dimension came scampering through. So we shoulda stayed home and watched it on TV?

Sorry if this is a bit garbled. Just out of bed etc.

And, obviously, although we're all inside capital, we're not all in it equally, are we. Class struggle etc.